What is Rapamycin Working Principle and Application Direction?

What is Rapamycin? What is the working principle and application direction?

Rapamycin can target mTOR (mammalian target of rapamycin) and play a role in inhibiting mTOR.

mTOR is divided into mTORC1 and mTORC2 according to their combined Compound. The former plays a role in Autophagy Signaling Pathway (of course there are many other functions, including the synthesis of Lipid and Protein, specifically want to check more Pathway where mTOR is located, you can go to KEGG) .

Autophagy can inhibit the early formation of tumors, but also promote the survival of advanced tumors. Therefore, Rapamycin may be helpful in the treatment of early cancer.

However, the treatment of cancer is of course not so simple, but for the time being it can be imagined in this regard.

Rapamycin is a medicine, dare not talk nonsense

Rapamycin is an anti-fungal drug with a macrolide structure, which can also suppress immune effects to a certain extent.

At present, rapamycin is clinically used for anti-rejection after organ transplantation and as an adjunct therapy for a few cancers. 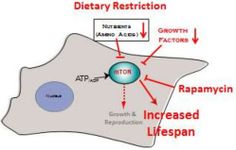 Now when you search on the web, you will find that the title is often followed by the words spiritual medicine. If you only know rapamycin from the identity of antibacterial drugs and immunosuppressants, it is too rough.

The word miracle drug refers to the future rapamycin, or a drug with a similar structure and function to it, which is expected to become an anti-aging drug that extends human lifespan.

There are still quite a few molecules that have been praised as magic drugs this year. Metformin, aspirin, rapamycin, some active ingredients of Chinese medicine and certain supplements.

Among them, rapamycin should sound the most scary.

Yes, the name feels like "Going to heaven if you don't succeed".

Rapamycin was born on Rapa nui, Chile. This island has many historic giant stone statues called "Mao". These stone statues have strange expressions and are oriented towards unity. The locals can't say it is dry. What use.

In 1964, a Canadian expedition team came to Easter Island, and this team hadn't found a good medicine for a long time.

At that time, "expedition" was popular, running around the world, collecting mud from various places, and separating microorganisms and microbial secondary metabolites from them to find new antibiotics.

This group of scientific researchers found that the island residents were barefoot and had a lot of horses. In that era, raising horses would increase the probability of tetanus infection.

Before the war, the ancient archers increased their "weapon power" by inserting the arrows into the horse dung.
The enemies in the battlefield would be infected with tetanus and die.

When they passed the mao stone statue, Nógrad found a piece of land at the foot of the stone statue in the shadow all year round.

He collected a piece of soil and co-authored the last More than 60 samples have been taken from the island.

Nógrad returned to Canada and observed the tetanus spores (the dormant body of Tetanus bacilli) in the soil.

He found that only one soil sample had tetanus spores, and the remaining more than 60 copies were clean. There must be antibiotics on this island!

Nógrad quickly handed the sample to the Canadian pharmaceutical company Ayerst. The PhD researcher in this company named Surendra N. Sehgal found that the soil of Easter Island did contain unprecedented antifungal antibiotics, so he named it as Rapa Nui. Rapamycin.

The name of Chinese antibiotic XXmycin is - mycin in the English name, so rapamycin is called Rapa-mycin, and the nickname is RAPA.

Since it is an antibacterial drug, it must be listed as an antibiotic. As a result, it has just been listed, and a large number of side effects have been reported.

It is said that this gadget suppresses immunity. However, in the public's mind, suppressing immunity is equivalent to easy infection and cancer. Pamycin was broken into the cold palace.

Two surgeons who "have known" have taken a fancy to the immunosuppressive effect of rapamycin. They are suffering from the rejection of organ transplantation.

After the combination of rapamycin and other immunosuppressive agents (FK506 + cyclosporin) in transplant patients, it really reduced the rejection and played the fate of thousands of patients with end-stage liver cancer for a long time-this initiative returning rapamycin to the field of vision also enabled the two doctors to win the Lasker Award in 2012.

Since 2006, it has been reported that rapamycin prolongs the lifespan of simple organisms. Subsequently, a large number of laboratories conducted such research and found that it is true.

From nematodes, worms, fruit flies, mice to rats can be thunder Pamycin extends life So rapamycin is known as a magic drug.

The principle of action of rapamycin is to inhibit the TOR complex of cells.

The full name of TOR, Target of Rapamycin (Rapamycin target protein), is a signaling molecule responsible for regulating the growth of every cell in all eukaryotes. TOR was discovered after rapamycin. In 1991, J. Heightman of Professor MN Hall ’s research group identified the TOR gene from rapamycin-resistant yeast, and then the research group determined the structure of the TOR protein. Naturally, I don't know that TOR's role is so extensive and so basic.

It can be said that without the rapamycin brought back by Georges L. Nógrad, the researchers estimate that the TOR protein (in the form of a complex) will not be identified for a long time, and we will lose a major part of the anti-aging / life extension study. The mainstay signal path is now.

What is the effect of TOR complex activation?

When is TOR activated?

It is mainly due to sufficient amino acids (arginine, ornithine, glycine) and glutamine, followed by sufficient oxygen, and insulin and growth factors (all kinds of GF) can activate TOR.

To sum up, when the cell thinks that it is rich in nutrients, full of food and clothing, TOR will activate, and then guide the cell to strengthen anabolism, inhibit catabolism, and grow up.

At present, rapamycin is used for immunosuppression is its traditional role, anti-cancer is its relatively new role, anti-aging is our expected role.

Rapamycin also has several structurally similar derivatives, collectively known as rapalogues, which are currently approved for the treatment of renal cell carcinoma (temsirolimus and everolimus), as well as specific types of pancreatic cancer, nodular sclerosis.

Iin addition, many cancers are not resistant to chemotherapy, but drug resistance soon appears, and there is no cure for TOR activity.

It is closely related to drug resistance. Many human trials of cancer have proved that the combination of rapamycin and chemotherapy drugs can enhance the lethality of chemotherapy.

The application direction of rapamycin we expect is anti-aging. Taking rapamycin also has the effect of forcibly prolonging the life of mice that are dying, which is hardly achieved by other drugs.

As a growth-promoting protein, the activation of TOR is not good for tumors, is it bad for normal people?

Yes. The reasoning is probably this: You can compare yourself to a sophisticated large-scale machine. Even if your energy source continues to draw energy from the outside world, the various "parts" in the body will wear out with the year of use.

And the activation of TOR is like in addition to meeting the basic needs of life, extra parts to work overtime, just to produce a bunch of biomolecules that may not be useful, from the cell to the body level, will age faster.

Because the activation of TOR can accelerate the synthesis of proteins indiscriminately, it is in a hurry to do more and more mistakes, and it is easier to produce harmful proteins that are misfolded.

Such a drug used for cancer treatment and transplant rejection may sound like a "big" drug or a "ruthless" drug. Is it a big problem as an anti-aging drug?

The safety of rapamycin is actually very good. Its side effects sound scary, but it is because of the sensation of brick houses who do not understand it. In fact, its side effects are no different from other drugs.

Let us briefly talk about it. First of all, after taking rapamycin for a period of time, some people have increased blood sugar (not diabetes).

This is because rapamycin inhibits TOR, which will cause fasting and valley-like effects, so some people appear hungry For pseudodiabetes, this reaction is generally mild (1 to 2 degrees) and reversible, and rapamycin is stopped immediately after recovery.

Rapamycin in combination with metformin

In addition, rapamycin has a variety of administration methods, which need to be optimized. Less large doses and fewer small doses.

As long as the total effect of the phased total dose is consistent, it can be flexibly adjusted according to potential side effects or combined with metformin.

The second is the concern of immunosuppression. In fact, rapamycin does not completely suppress the immune response, but prevents the immune from overreacting. So normal people will not suffer from "loss of immunity and are particularly susceptible to illness" after eating it, but they are already infected Patients should eliminate the infection first.

The above is the discovery process, principle of action, application direction and future prospect of rapamycin.

In 2017, Professor M. N. Hall of the University of Basel in Switzerland won the Lasker Prize not because of rapamycin, but because his research established the key role of TOR in regulating the growth of all cells in mammals.